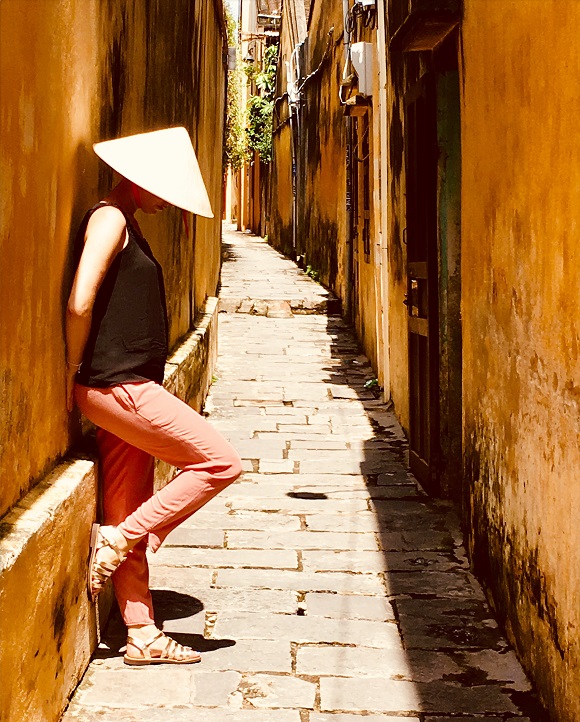 Last month I was telling you about my next big trip remember? And where did I go: Vietnam! So if you’re planning a trip to this country or just curious to learn more about it, follow the guide… I’ll share with you 6 reasons to visit Vietnam (keeping in mind it’s my opinion. Some people might have different ideas).

VIETNAM, only naming this country makes you travel far away, back in time…

Visiting Vietnam had been on my bucket list for a while when I finally decided to book my trip last summer. But how to summarize a 10 days’ trip in a country so intense and diverse?! Maybe by saying that Vietnam is an utterly compelling country, where tradition meets modernity, breathtakingly beauty meets extreme filthiness… It’s a country of pure contrasts.

1. Halong Bay & one night on a traditional junk boat

No trip to the north of Vietnam is complete without a visit to Halong Bay. I mean WOW!! The Halong Bay is one of the most beautiful places I’ve ever seen (and I had my fair share of travels)! We arrived there the third day of our journey and I was literally speechless. This quintessential Vietnamese limestone scenery is simply breath-taking! 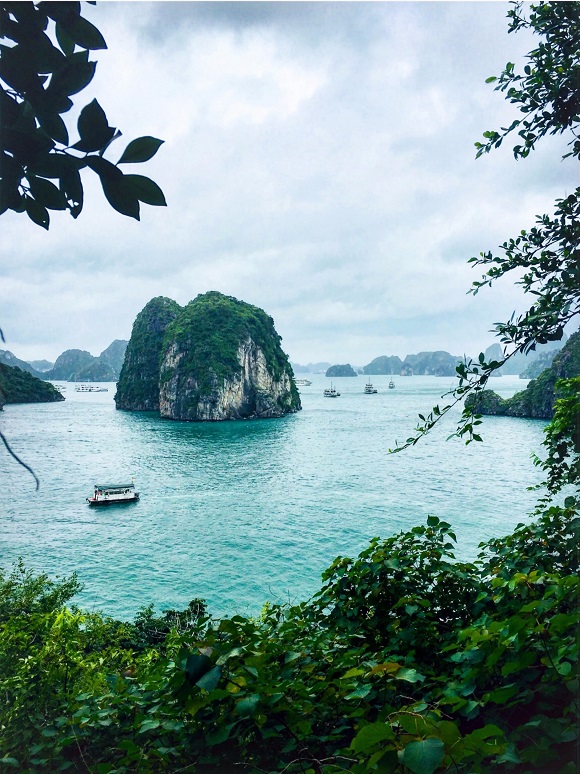 Explore the bay, its islands, caves, and floating villages… There are no words powerful enough to describe the astonishing beauty of this mythical bay.

There are more than 1,600 islets in the bay, topped by thick jungle growth. A local legend says these limestones are “droplets of dragons’ pearl.” 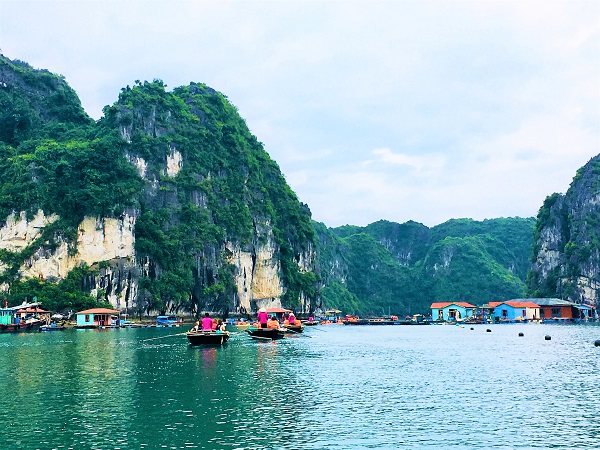 I was however saddened by all the garbage littering the bay. This trash is either coming from tour boats or from local floating villages (all in all I found Vietnamese are in general not very environmental cautious). So be aware.

Also, Halong Bay is full of people and tour boats. Not surprising, given the scenery. In general it’s bearable, but it’s still something to keep in mind. 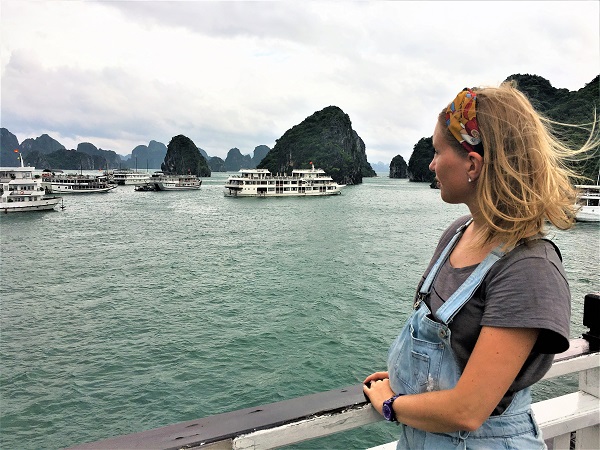 We rented a traditional junk boat, “the Victory Star” for two days and one night giving us the opportunity to really dive in this UNESCO’s World Heritage List wonder. The Victory Star is beautifully decorated, giving you the impression to be in an Agatha Christie novel, like “Death on the Nile”. This experience on the junk was so special! I could only recommend it! And hurry up as from 2030 the local authorities have decided to forbid night cruises on the Bay. 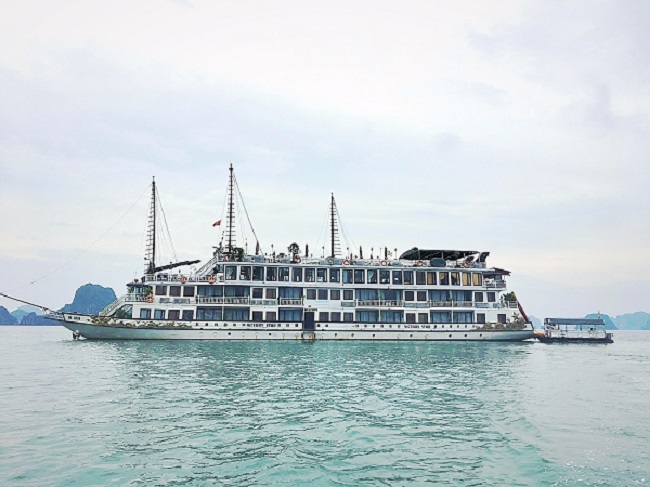 I have to warn you about so-called “junk scam” though, either on the junk or before you pick one: First of all be cautious when you book a cruise. There are tons of operators pretending to run cruises on beautiful, traditional and well-cared junks, trying to convince you to pick them directly in Halong Bay City’s harbour. So be careful when selecting your junk boat. As for the latter, double check your paperwork to be sure you get what you paid for. Tour companies will charge you what they think they can get away with, and many misrepresent the amenities you will get on board.

It’s really not simple to describe all the emotions you’re going through while sailing through this whimsical mountainous seascape. My only advice: relax and enjoy!

One of the most surprising places I came across during this south eastern Asian journey has definitely been Hué, especially its Imperial City aka “the Forbidden Purple City.” 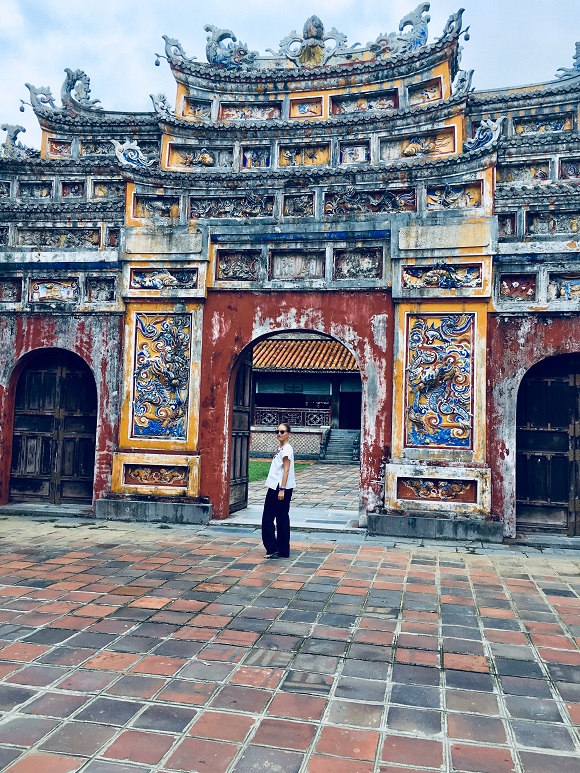 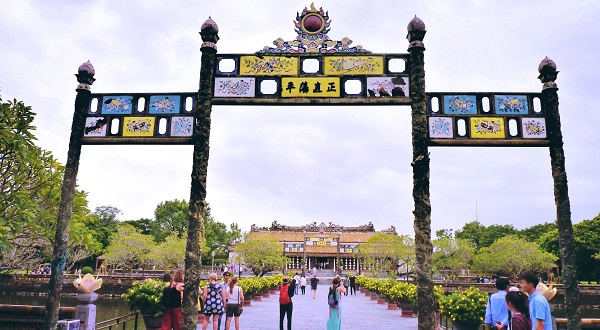 I haven’t been to Beijing’s Forbidden City but I genuinely believe after seeing Hué’s Imperial City there would be no need to (except of course, for the pleasure of travelling and discovering a new city). 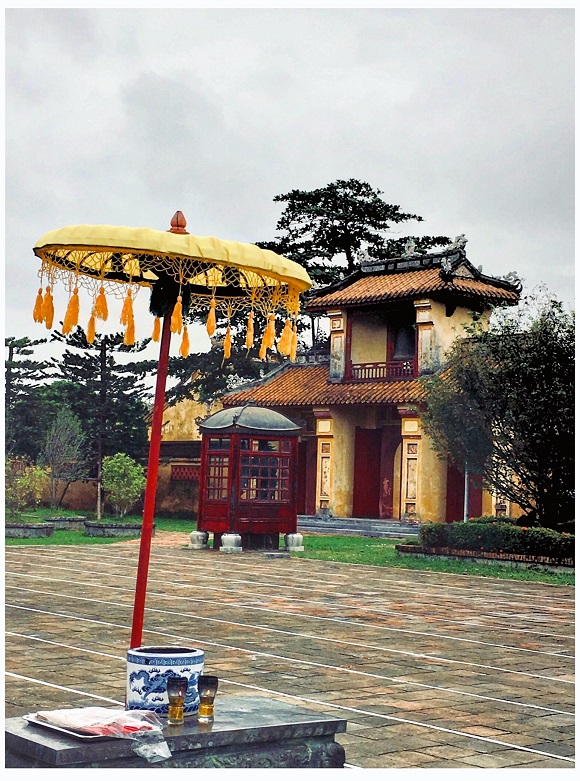 What made this visit even more special was our tour guide. He was a genuine descendant of Vietnam’s last imperial dynasty, the Nguyen Phúc. They lived on the premises of the “Purple City” until the outbreak of the Vietnam Revolution (1945). At one point, while in one of the many buildings of the City, he even pointed at emperor’s Minh Mang portrait telling us he was his great-great-great-great-great grandfather. How cool is that?! (I, myself find it very cool!)

I’ve travelled throughout the whole country, from north to south. What I really liked about Hué is that’s where I experienced the country’s history at its fullest. From palaces to pagodas, there are plenty of grand historical monuments (although many have been pretty destroyed by the Vietnam War). 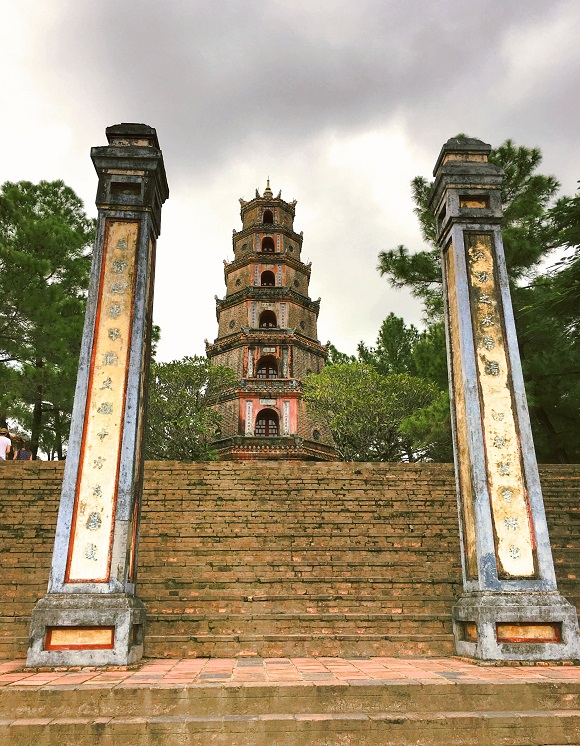 While in Hué I also learnt why many of the buildings in Vietnam’s main cities have yellow-coloured walls and red-coloured roofs. Those are imperial constructions. The yellow colour symbolises power/yang/Buddhism and the red, happiness/ying/Confucianism.

A UNESCO World Heritage town, Hôi An is one of the most picturesque, lovely places to visit in all of Vietnam. Unlike most of the country that has seen so much development in the few years, Hôi An’s architecture has stayed intact. 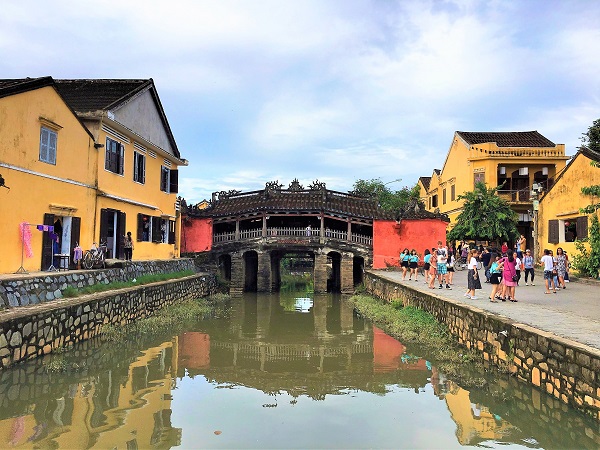 After already one entire week in Vietnam, Hôi An was a very welcomed break from all the hustle and bustle typical of the country. Traffic and pollution are almost totally absent.

The best way to get a feeling of the city is on foot. This will allow you to dive into its very laid-back, peaceful atmosphere. Strolling along the banks of the Thu Bon River- the city’s focal point, you’ll witness the old town incredibly well-preserved architecture. A mix of French colonial, Chinese and Japanese yellow-painted buildings covered in bougainvillea and wooden-fronted shophouses! 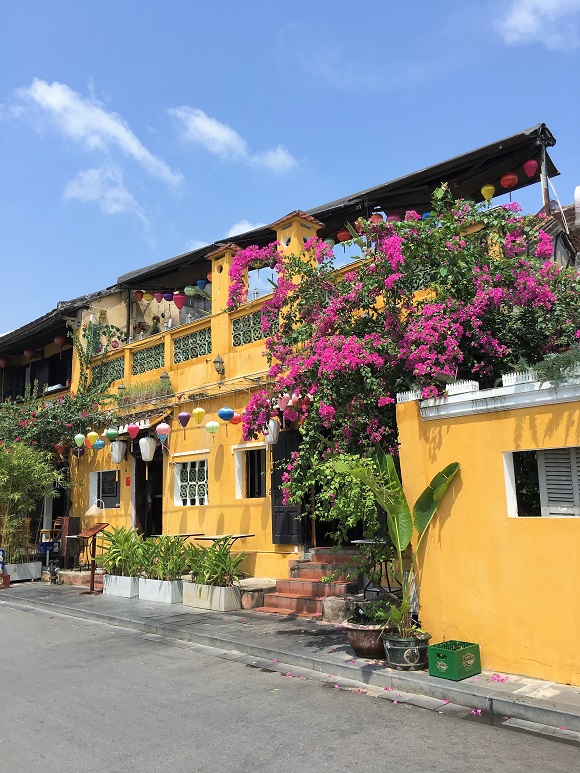 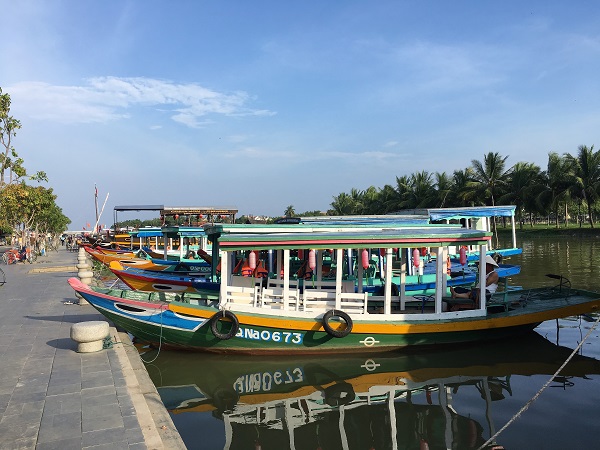 One of my favourite things about Hôi An is the many handcrafted lanterns hanging above the streets. They give the city its colourful vibe. Strolling around town you’ll see all shapes and colours and understand why Hôi An is known as Vietnam’s “lantern capital”. 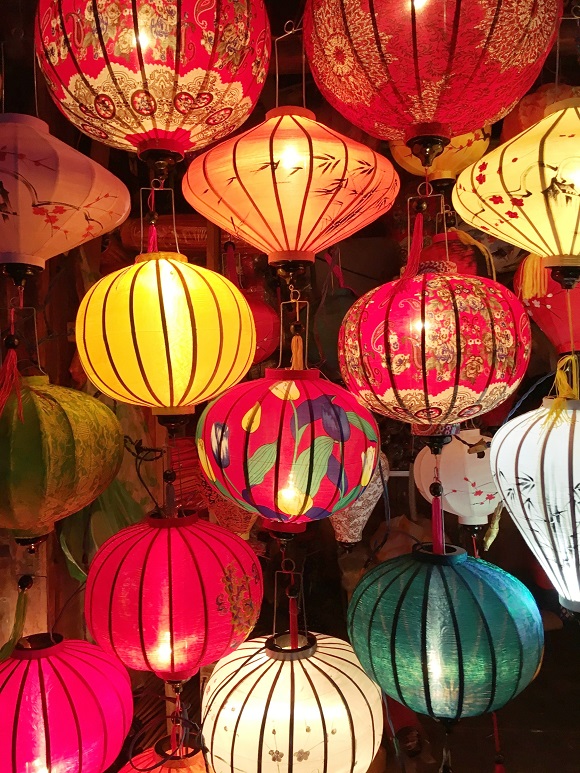 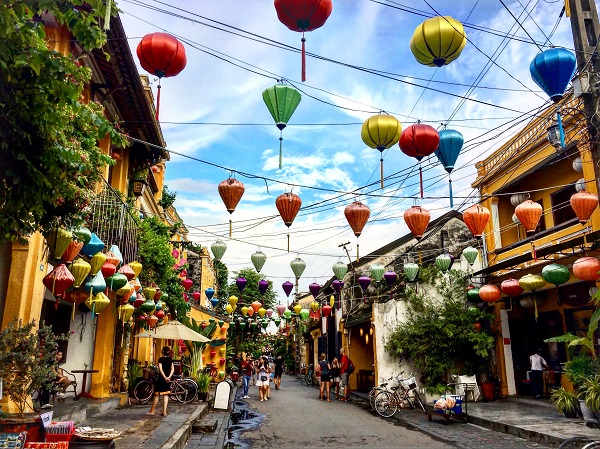 Another of the country’s specialty you’ve to experience while exploring one of Hôi An’s many coffee houses is the so-called “Egg Coffee” (cà phê trúng in Vietnamese). Simply
D-E-L-I-C-I-O-U-S!! 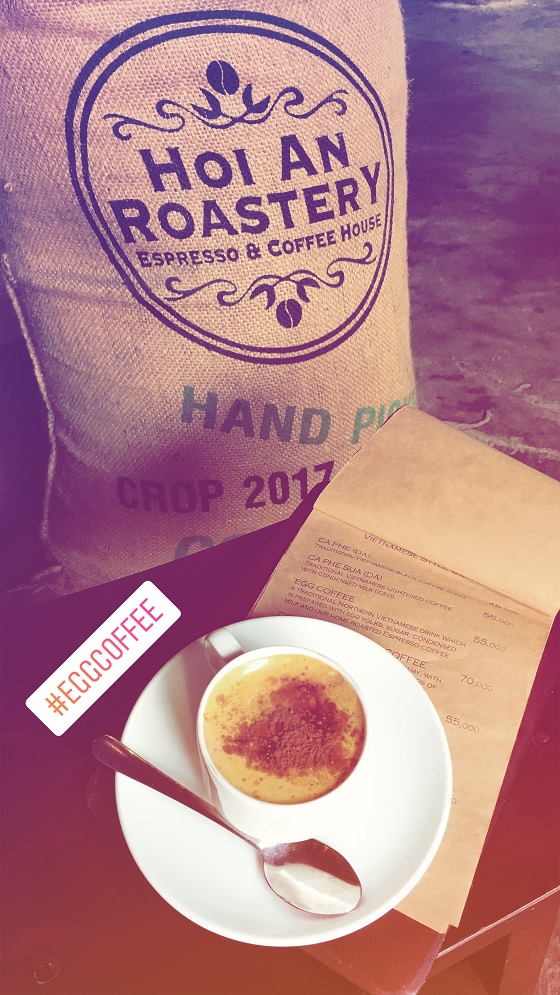 Whenever I travel, I always like to buy local souvenirs to bring back to my family and friends or even just for me. However, I’m fairly picky when it comes to purchasing memorabilia as I don’t like to buy stuff just for the sake of bringing something back home.

One of the best items to buy is tailor-made clothes, especially in Hôi An, which has long been known for fabric production and silk craftsmanship. But let’s face it: the tailor scene in the city is out of control and quality may vary depending of the shops. Our tour guide recommended this handicraft manufacture where I got myself a tailor-made “áo dài” a traditional silk garment made of a tunic and wide-legged trousers. Not having a lot of experience I was mostly satisfied with their services, especially since they only had 48h to make my tunic!! 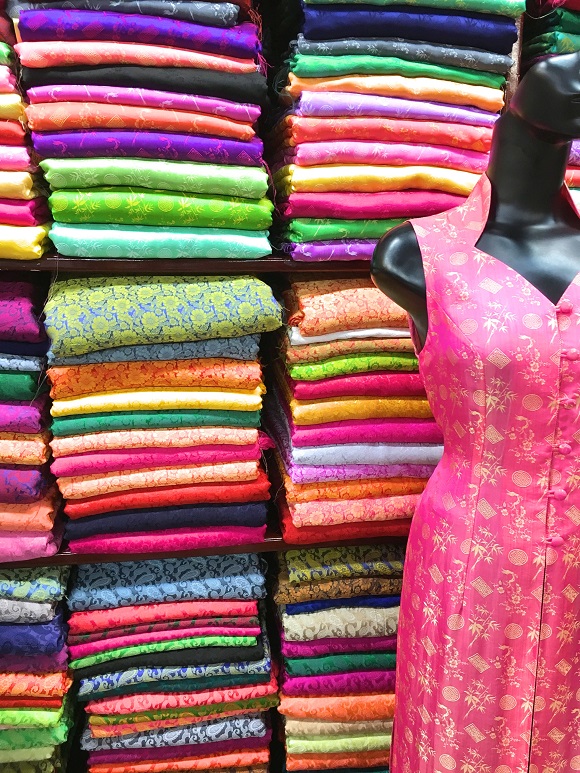 By the way, for those looking for a less traditional outfit, Hôi An’s tailor are also master copiers! Show them a picture from a magazine, and they’ll whip up an almost-identical outfit.

All in all, souvenir shopping in Vietnam isn’t an issue. From traditional to more quirky, this country has it all!

You can’t visit Vietnam and not stop in Ho Chi Minh, Vietnam’s largest city, previously known as Saigon (although for most the name has stuck).

I’ve to admit my first impression of the place wasn’t very positive though… 🙁  At first the city appears very grey, polluted and noisy, in a nutshell: a mess!

To soak up Saigon’s vibe, you really have to walk around the city! When you do so, you might discover a secret, trendy and even somewhat charming city. A fascinating blend of old world and shiny new sky scrapers. Ancient trading quarters of craft industries juxtaposed with colonial buildings, all overseen from 21st century glass-and-steel high-rises. 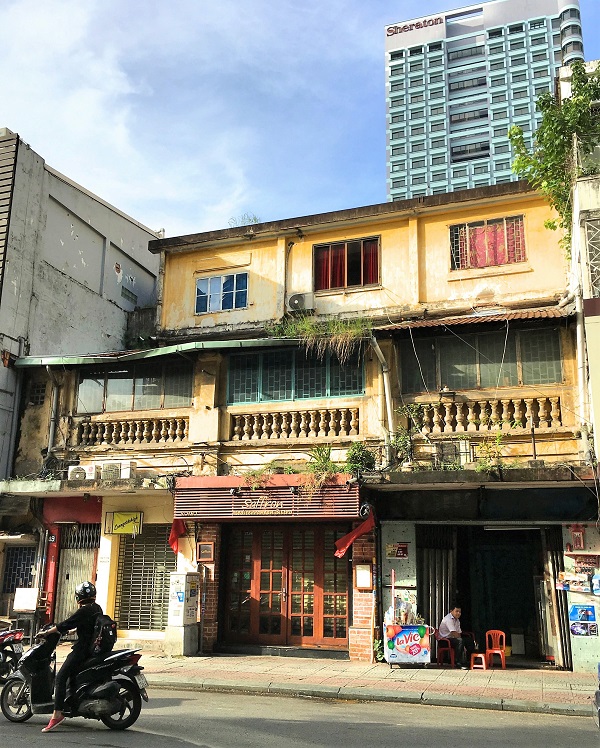 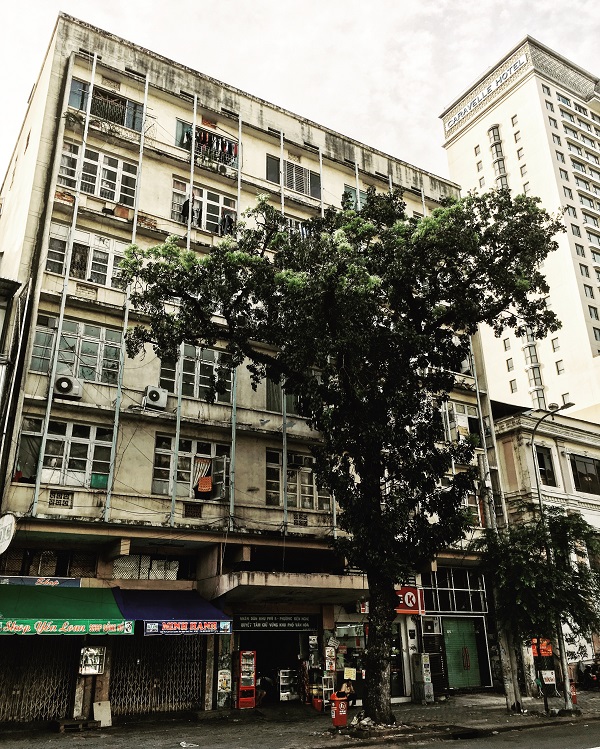 Our tour guide took us to the bustling Chinese quarter of Cholon and more specifically to Bình Tây Market, the district’s traditional market. If you want to add to the culture clash you already experience when in Vietnam go to Cholon! Funny anecdote, as my throat was starting to get sore, I got to try an ancient Chinese remedy (which I sadly don’t remember the name of but see picture below: the brown balls). 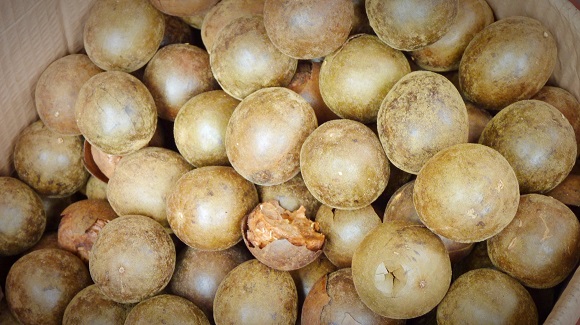 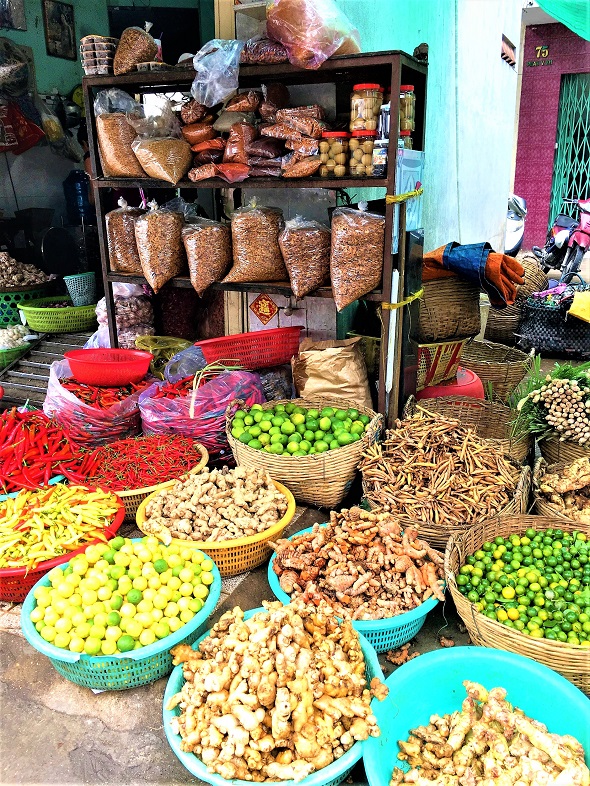 I was very disappointed we stayed less than 48h! The southern metropolis is so big that you can’t visit all of it in that very limited time frame, but, I made the most of the time I had and explored the Dong Khoï Area, an upmarket district close to our hotel combining French colonial enclaves with ancient tiny Chinese style houses. We also had an amazing traditional Vietnamese dinner on the roof of an art-deco terrace building at Secret Garden. 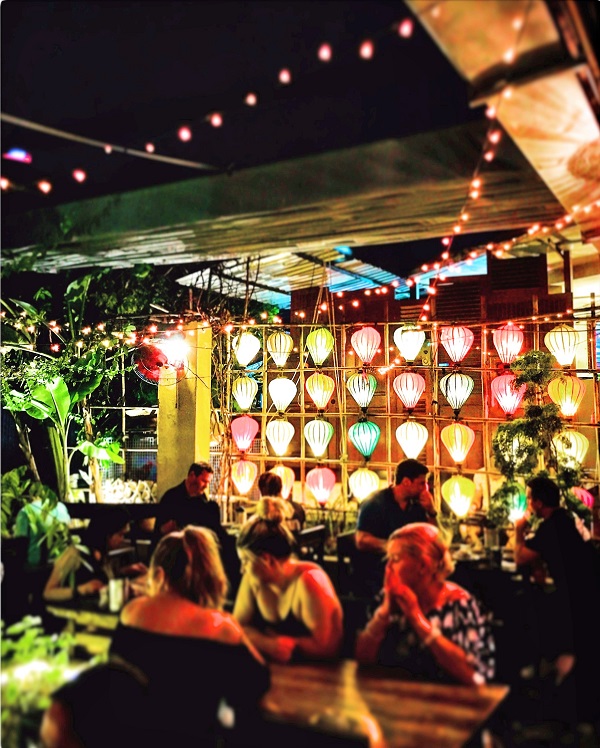 I loved Saigon! There is a difficult-to-describe-energy, some irresistible urban buzz. I think one either loves HCM completely diving in to it or gets totally overwhelmed just praying to go away.

6. Experiencing “near death” when crossing the streets

Crossing streets in Vietnam is an adventure in itself! One of the first and more important things to learn when visiting Vietnam is how to cross the street. The preferred mode of transportation is motorbikes (you can have up to 4 people on a scooter) and the stream of two-wheelers feels like unpredictable, roaring rapids when you’re standing on one sidewalk trying to get to the next. 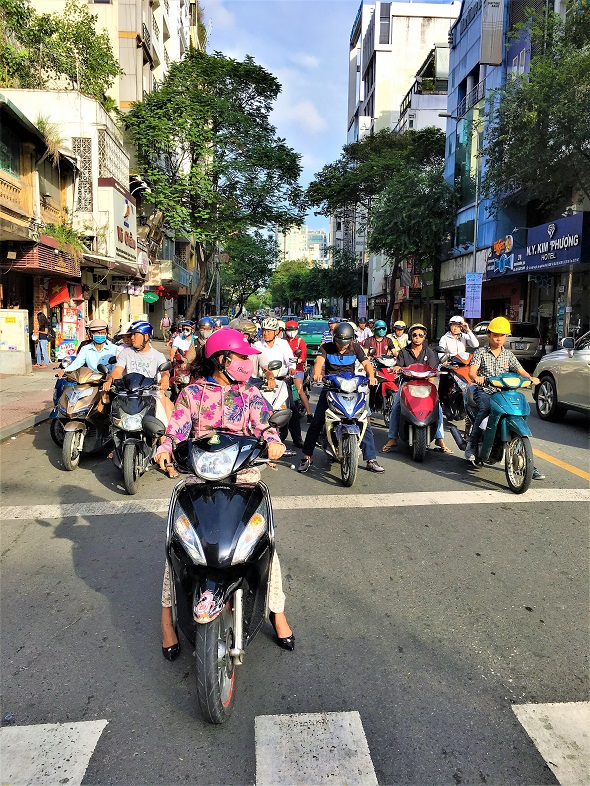 In Vietnam everything/everyone is intertwined on the streets! Motorbikes, cars, buses and pedestrians. But scooters are really the “kings of the street”! When there is no more space on the streets they drive on the sidewalks! The first time you try to cross the street the “western way” it’s really impressive! You get the impression they will run you over no matter what, as if safety rules wouldn’t apply at all. Hence my only piece of advice would be to: keep moving, do not to stop but appreciate the experience! It’s hilarious!

I can only recommend Vietnam. It’s a fascinating country which won’t leave you indifferent. A country that never sleeps. Frenetic and somehow serene. Fairly dirty and remarkably awe-inspiring. Greyish but colourful! This trip to Vietnam was really worth it!

Thanks for reading! If you enjoyed this post don’t forget to sign up to my blog to get the next articles directly in your mailbox ! 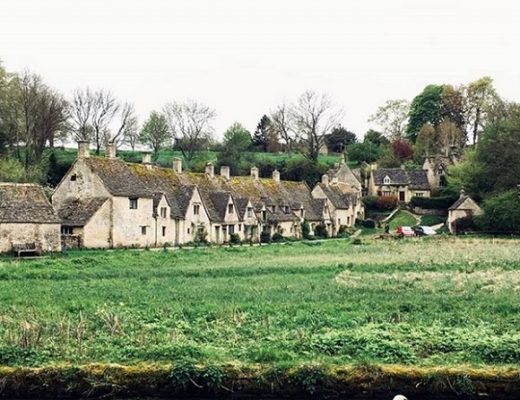 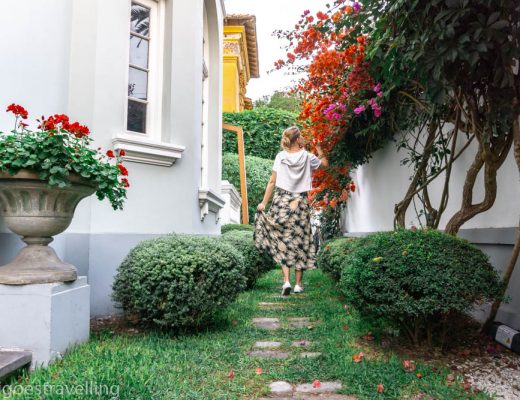 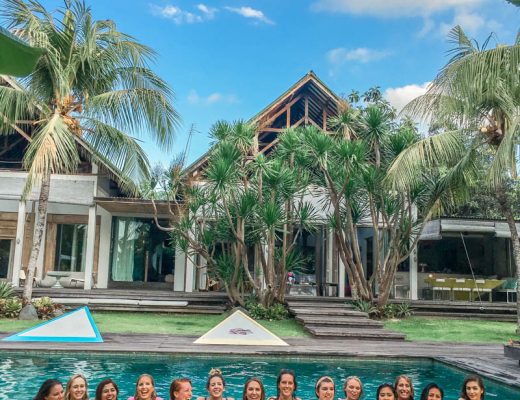