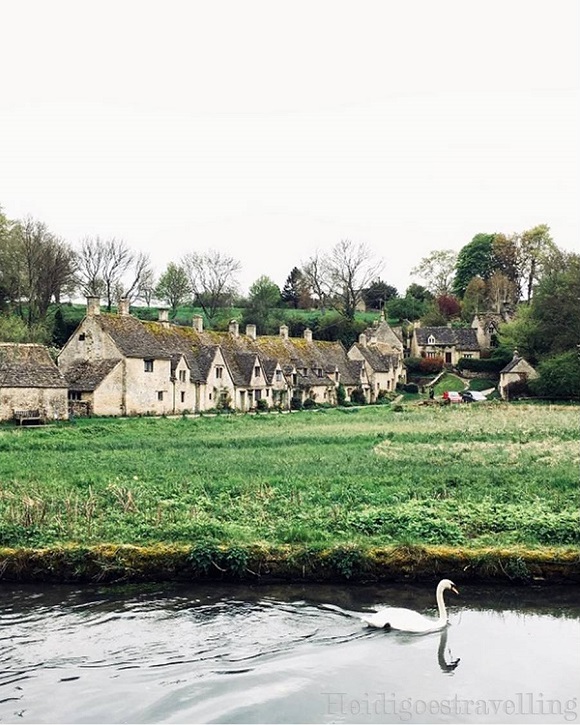 A month ago I travelled to Oxford and the Cotswolds for a three-day trip. This part of the UK had long been on my bucket list so I was super excited when I got the opportunity to travel there! Curious to find out more about Oxfordshire? This post is a compilation on how to spend a long weekend in Oxford and the Cotswolds. Follow the guide…

After a short flight from Heidiland, plus an hour bus drive from Heathrow, I arrived in Oxford on one of those typical British rainy days. Following a nice hot cuppa, my (local) friend took me to Oxford city center for a walking sightseeing tour (she was the guide ;-)). 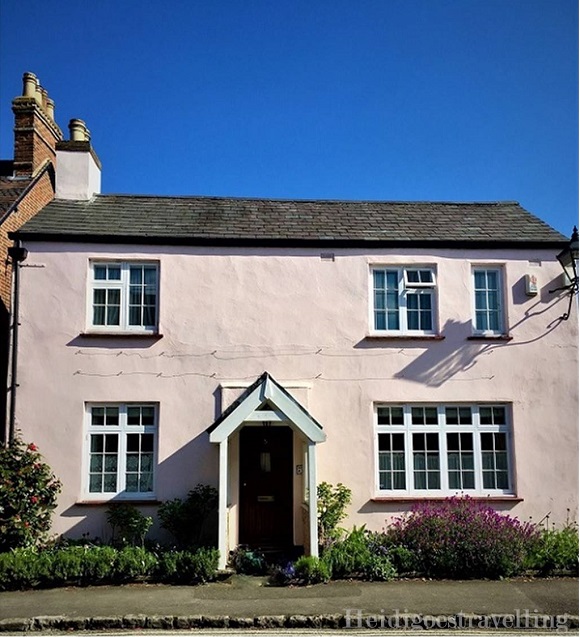 Golden stone buildings (mostly college), many lush English gardens, two rivers – the Cherwell and the Thames (which is confusingly known as the Isis when it’s in Oxford) on which you can punt, plenty of shops, tiny restaurants and some nice rooftop bars, Oxford is definitely full of charm! 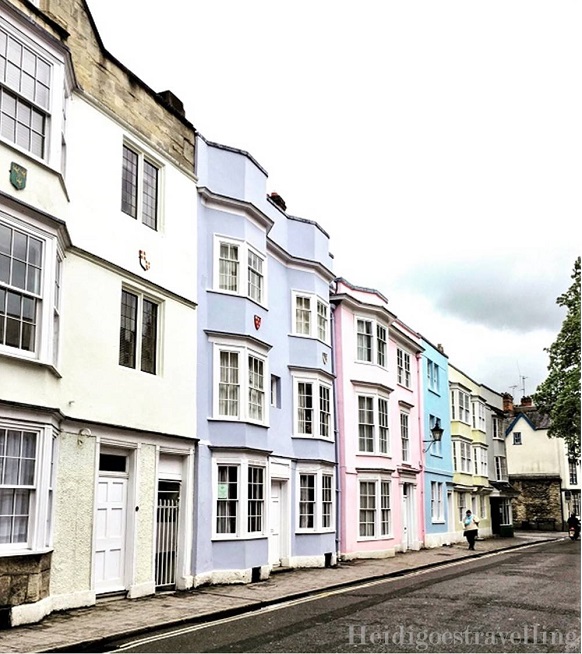 When you come to Oxford it’s primarily to visit its many colleges. This town breath academia, everywhere you look. Stepping on the streets of Oxford made me definitely think of my own good old Uni days. 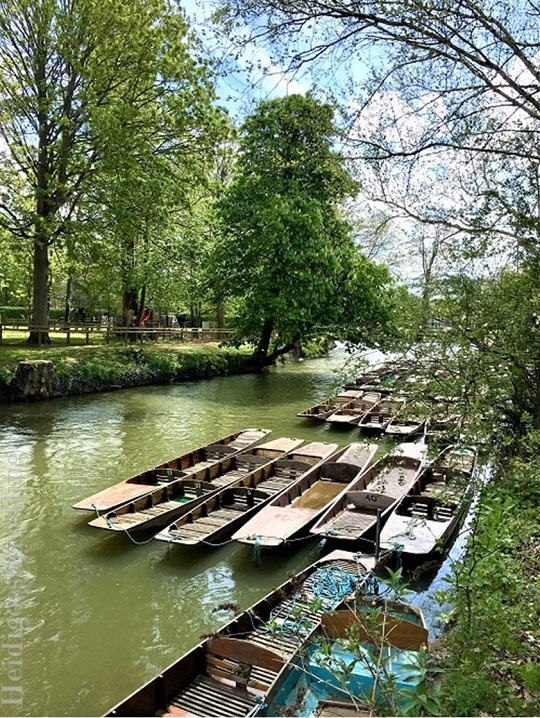 The University of Oxford has 38 colleges dotted around the city. Many of them are open to visitors (though check opening hours beforehand to avoid bad surprises). You can take a tour (£8–£10 per person) to visit their quads, grand staircases, dining halls and college chapels. One of the best-known is Christ Church – as much for its role as Hogwarts in Harry Potter as for its famous alumni like Lewis Carroll (Alice’s in Wonderland father) and Albert Einstein. However my favourite is Worcester College, with its pretty gardens and cottage-like dorms. 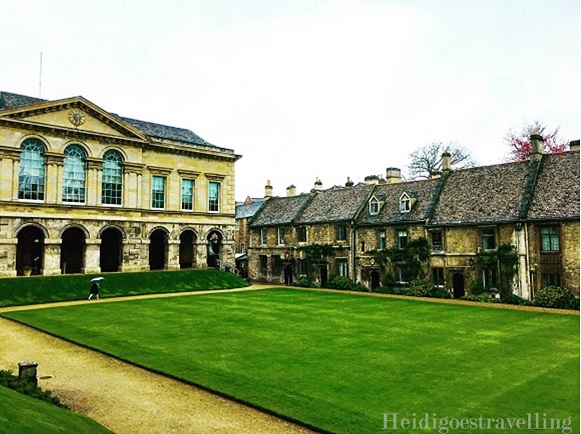 Another way to get an insight into the world of Oxford’s academia, is to take a guided tour with Oxford sightseeing bus tours (15£ the ticket). This tour will give you a good glimpse of all of the main colleges along with quirky fun facts about their traditions. And as you have so many of them it will allow you to decide where to direct your visits once off the bus. 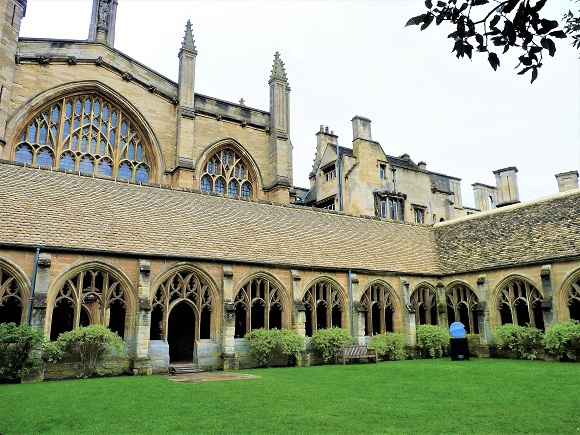 Although most of Oxford’s attractions involve academia, there is a vast array of not-only-academic things to do in this city: the Ashmolean museum, punting on the Isis, attending a music (mostly classical) concert in one of the colleges’ chapel or a take a stroll in the botanical garden. Oxford is a nice mix of history and culture with a relaxing pace. 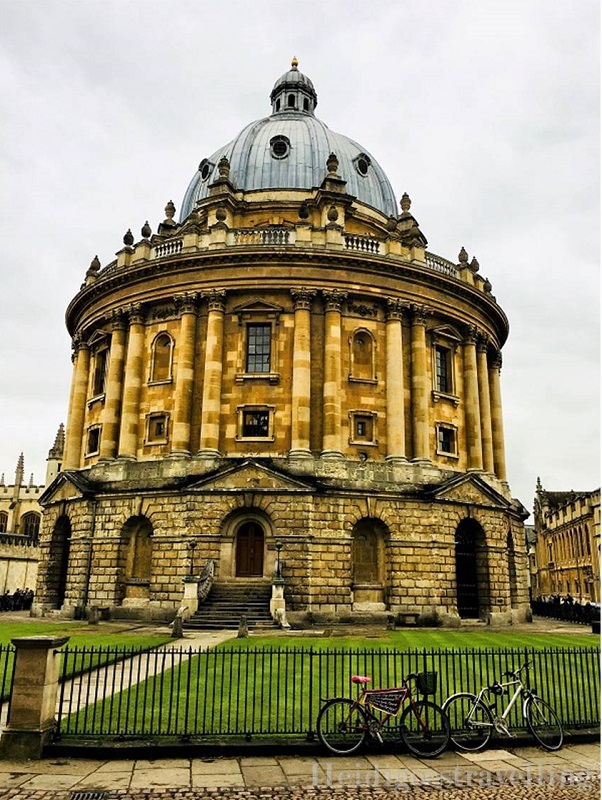 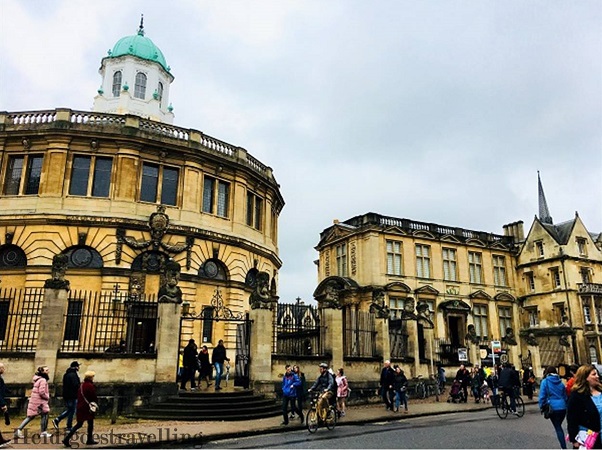 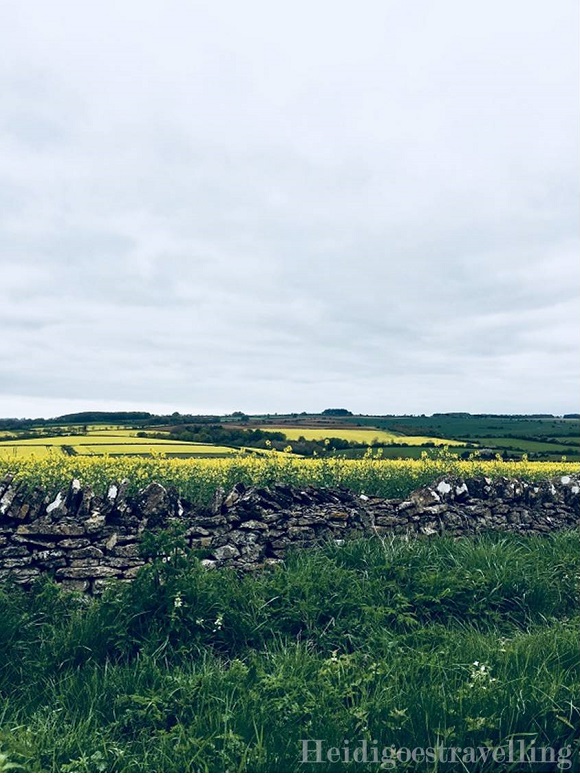 High up on my bucket list were the Cotswolds aka quintessential British countryside. I seized the occasion of Oxfordshire (Oxford being the capital of this county) bordering the Cotswolds to explore this region. 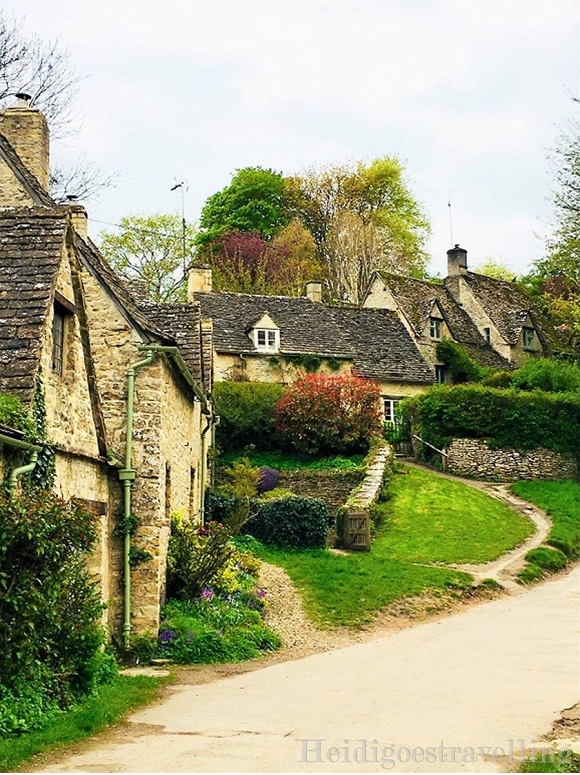 We started our visit with UK’s greatest palace (outside of Buckingham Palace): Blenheim Palace. This palace is the birth place of Sir Winston Churchill and a UNESCO World Heritage Site. Entry costs 26£, allowing you to visit both the palace and its beautiful gardens. I’d have loved to visit their maze but given we already spent 2 hours visiting the palace using their new app/guided tour and as we had plans to further visit the Cotswolds, I quickly dropped this idea (plus the weather was dreadful lowering the fun anyway). 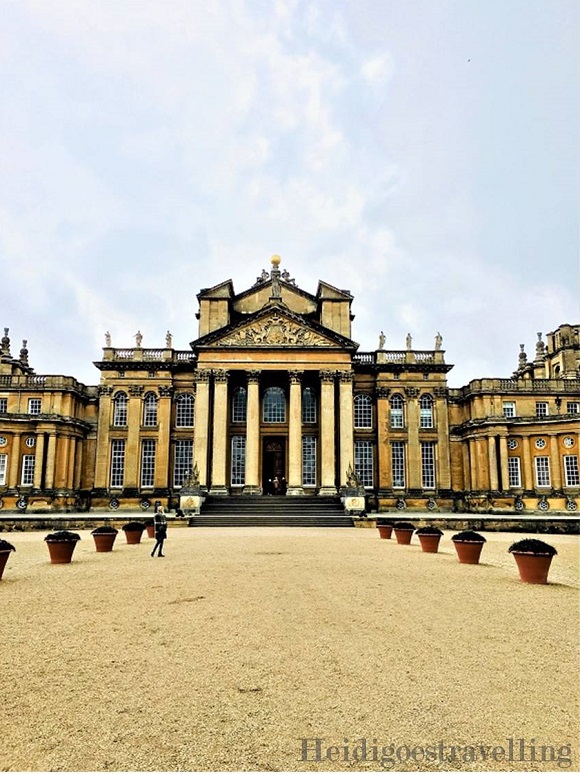 Along with the weather improving we drove to Burford, the “gateway to the Cotswolds”. This picturesque village is mainly built on a single hill, with its main street flanked on both sides by an unbroken line of ancient houses – spanning from old stones, to Tudors and Georgian frontages. 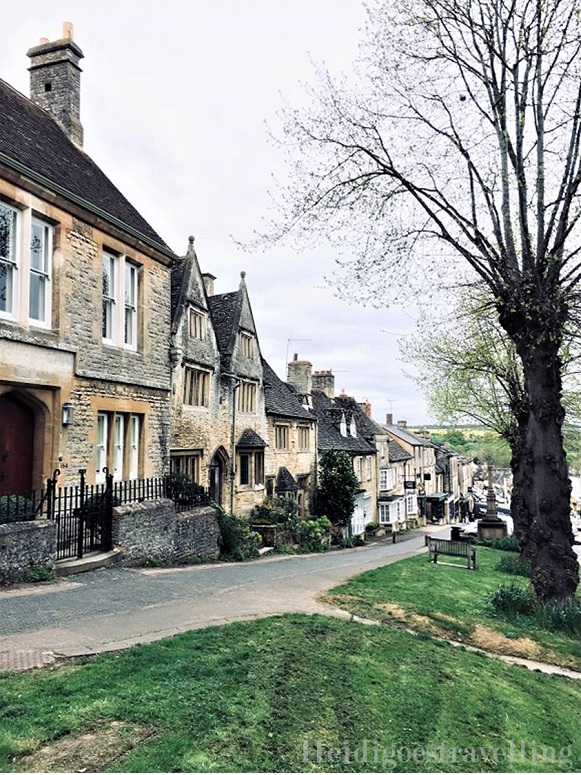 In addition to quaint village houses, Burford has a collection of small shops – many of whom are antique shops – tea houses, a museum, pubs and inns. 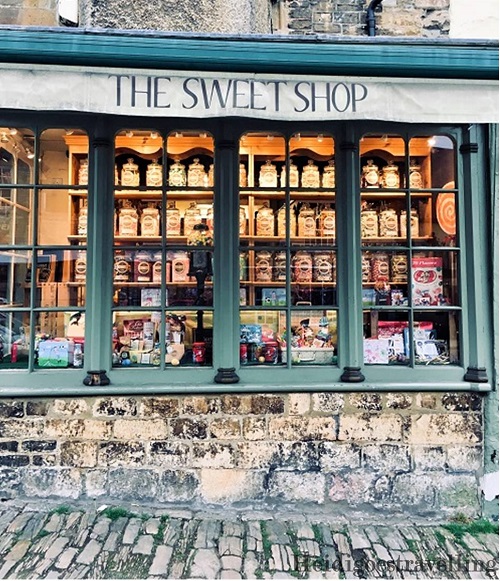 The village is also home to an impressive church dating back to the 15th century, with a very “romantic” and peaceful graveyard (yeah I know, it sounds weird saying that about a graveyard). 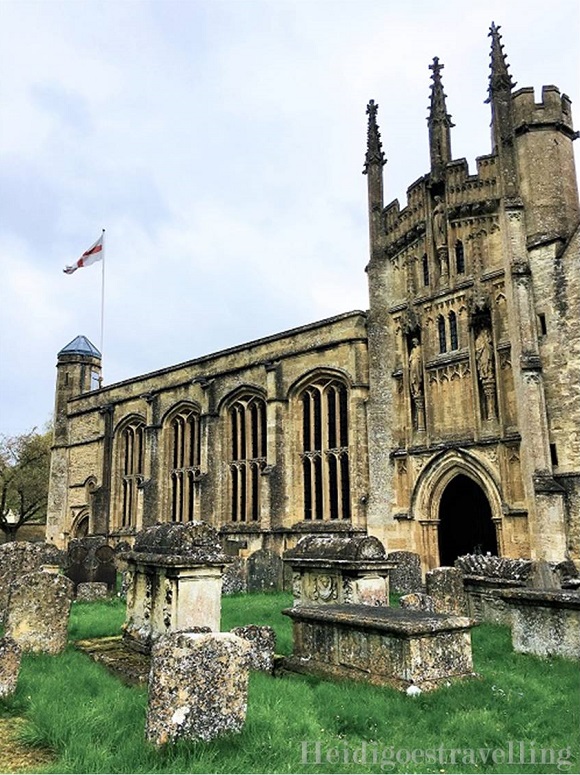 As we arrived in Burford at lunchtime, we stopped at the lovely Bay Tree restaurant for the traditional Sunday roast. They cook a delicious homely cuisine mainly using local ingredients. I ordered their pork roast with plenty of gravy and mashed potatoes and a sumptuous banoffee pie. All sooo yummy!

After Burford, our next stop was the oh so pretty village of Bibury aka “the most beautiful village in the Cotswolds”.

Surrounded by leafy meadows, Bibury is famous worldwide for one of its streets, Arlington row, a decor straight from a postcard. When I dreamt about the Cotswolds and quintessential British countryside, I had exactly this scene in mind. It’s so scenic and adorable it’s almost unreal!! Strolling around you understand why it’s one of the most photographed streets in the UK (but we’re lucky, there were not a lot of tourist given the rainy weather…). 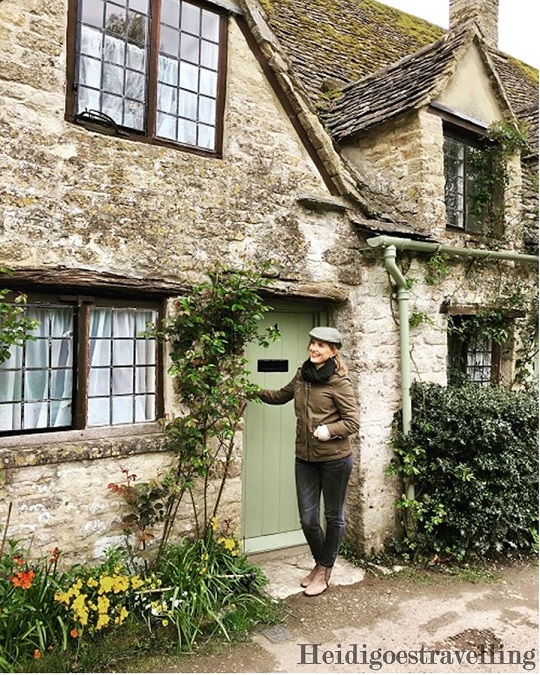 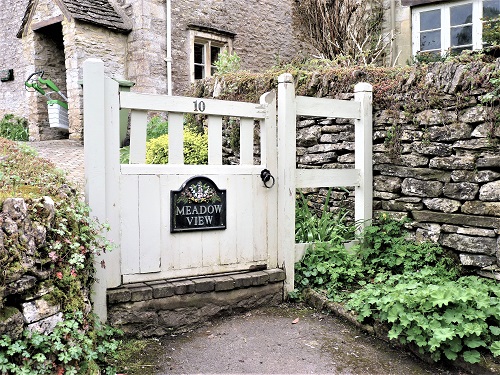 TIP: Visit the Cotswolds when the weather conditions are more on the rainy side, avoiding the flock of tourists. Plus a gloomier light is better suited for taking good quality photos. 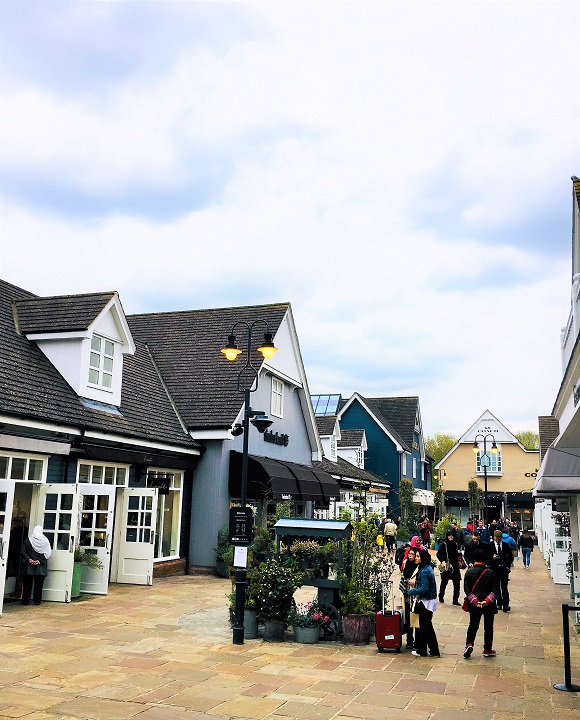 On my last (full) day in Oxfordshire, and left by myself as my friend had to go to work, I decided to take a trip to Bicester Village for some retail therapy.

Bicester Village is a designer outlet 14 minutes away by train from Oxford (and 46 minutes from London). This luxury shopping heaven is home to more than 160 boutiques of world-famous brands, each offering savings of up to 60% on the recommended retail price all year round.

TIP: When you go to Bicester Village be prepared! Decide on a budget, because you could end up getting totally over budget. Plan also enough time. I thought I’d spend only a couple of hours there and in fact I ended up spending way more than 4 hours wandering from shop to shop…!

This entire trip in Oxford and the Cotswolds was pure enchantment! Quintessential britishness as I dreamt it. In three days I got a good introduction to this part of England. On my next visit I’ll dive deeper into the wolds!

What about you, feeling inspired and already planning your long weekend in Oxford? If so, or if you have been there and have additional recommendations, I’d love to hear from you in the comments below! 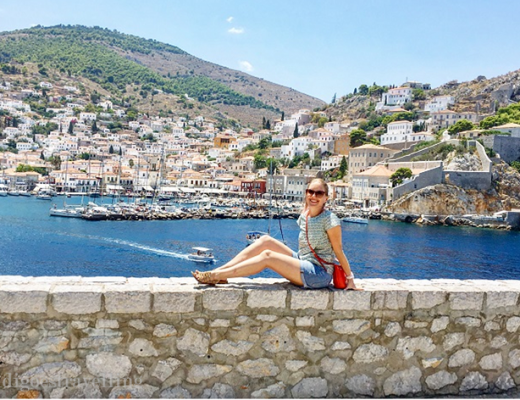 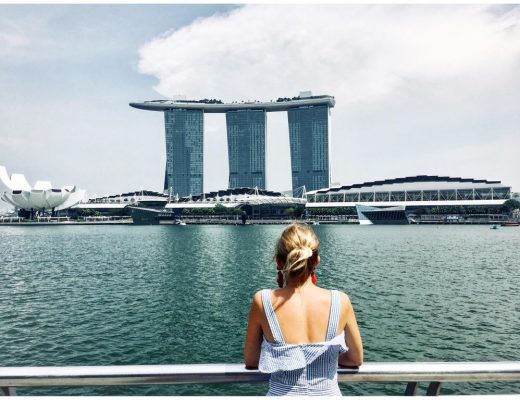 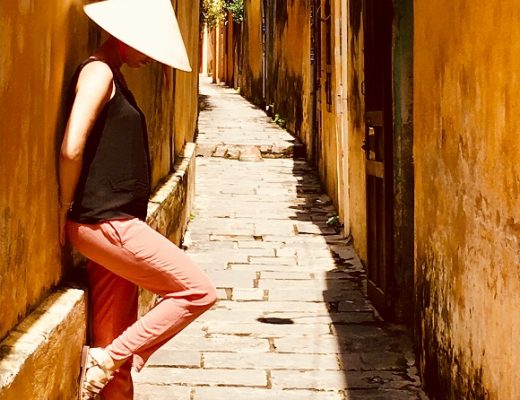 Hi, my name is Emilie, content creator, blogger and magic seeker with a mission to promote the stylish things in life!

★ Birthday ★ . . My actual birthday was last

≀LAUENENSEE≀ 🇨🇭 . . . What are your trav